LYNEMOUTH is a village in Northumberland, England. The village is situated 3 miles (5 km) north-east of Ashington, and is in close proximity to the village of Ellington which is located to the north west. The village's location was decided by its close proximity to coal mines. In 1870-72, John Marius Wilson's Imperial Gazetteer of England and Wales described Lynemouth like this:

The parish of Lynemouth lies in south-east Northumberland, on the North Sea coast. It is one of the smallest parishes in the County and until 1926 there was only a farm and cottage here. The parish is probably best known for its industrial history associated with coalmining.

There are no prehistoric, Roman or early medieval sites or finds in the parish. The township is first recorded in the 13th century but there is no evidence of a village at this time. However, aerial photographs do show that people were farming here in medieval times as small fragments of ridge and furrow survive in some pasture fields.

Lynemouth seems to have escaped the warfare that affected the border region of England in medieval times. Likewise, when unrest and fighting between border families spilled across the County in the 16th and 17th centuries, Lynemouth seems unaffected.

In the post-medieval period, a whale became beached at Lynemouth and was killed by the local blacksmith. The jawbones were used to make an archway at nearby Cresswell Hall.

Economically, the rise of Lynemouth came in the 20th century. The Ashington Coal Company bought large amounts of land here in 1900 and began building a mining village. In 1921 there had been only four houses in Lynemouth and just a few years later, when Lynemouth Colliery was established in 1927, there were 500 houses. They were followed by shops, a Miner’s Welfare Institute, primary school, and a church. The church became a parish in its own right in 1961. The colliery combined with Ellington in 1983 and meant the effective closure of Lynemouth.

To the south of the village just outside the parish boundary is the former Alcan Lynemouth Aluminium Smelter and power station. The aluminium smelting process was powered by the adjacent coal-fired power station since it opened in 1972. The power station formerly belonging to Rio Tinto was sold in 2012 to RWE, one of Europe's leading energy companies, and now operates under the name 'Lynemouth Power Ltd.'

Lynemouth and the surrounding industrial area played an important role in the 1985 feature length docu-drama Seacoal about the Seacoalers that make a living from collecting waste coal from the beach. Lynemouth and the surrounding industrial area can be seen in the 2000 film Billy Elliot. Lynemouth Cemetery doubles as Everington Cemetery, in which Elliot's mother is buried. The colliery, which was demolished in 2005, can be seen in scenes filmed at the cemetery.

In 1921 Ashington Coal Company began building the first colliery houses in Lynemouth. They had turned their attention to the East of their 37 square mile royalty with the intention of sinking a new pit at Lynemouth after success at Ellington Colliery. At this time only 22 people resided in the farmsteads around the village. Lynemouth was to be Ashington Coal Company's 'Jewel in the crown', comparable with any colliery village in the country, with a proposed plan of 1,750 homes either side of the river Lyne and down to the sea. However, the 1926 General Strike scuppered plans and house building operations ceased for some time after opening Market Street shops in 1925. Five Co-op outlets traded at that time - a grocers, greengrocers, butchery, hardware and drapers. They were a lifeline for early miners as a dividend was paid out on purchases, usually every six months for members.

Lynemouth now had a population of almost 2,000 and 520 state-of-the-art colliery houses built. All of these were built in neat squares and rows ranged from two bedroom to five bedroom houses, all with electric light, a downstairs bathroom, scullery and living room with real flush toilet built in the backyard. This was a far cry from the old colliery villages whose facilities were primitive in comparison. The front hedged gardens were extensive and every 20 yards trees were planted. Some can still be seen today.

The perfect oval shape of the Welfare cricket field was laid out by 1924 and other facilities for football, bowls, tennis and hockey as well as a Bandstand were provided for the miners. Fortunately, to accomodate a growing community The Institute, Lynemouth Inn, The Anglican Church, The Welfare and Albion Road shops had all been built and opened by 1925. Ironically, the new Lynemouth Council school was opened on the first day of the General Strike on 3rd May 1926.

Lynemouth Inn built in mock Tudor style in 1925 was not just an ale house but also the meeting place for Ashington Coal Company officials who owned the model village. An imposing building with stabling at the rear and inside the Inn a bed for the night for weary travellers. A strictly men only 'spit and sawdust' hostel in the early years, it later hosted wedding receptions and became a mecca for dancing in the 1950s and 1960s. Decsribed as the finest Miners Welfare building in the North, the Institute was built in Georgian style. The first phase was the picture and concert hall at the rear where the OperaticSociety met and was given the name 'The Gaiety'. The main building completed by 1927 housed offices, a billiard room, reading room and a special room for ladies. One of the downstairs rooms was given over to a gymnasium. No longer did Lynemouth folk have to travel to Ashington for their social and sporting activities.

HISTORY OF THE PARISH COUNCIL - This information has been compiled by the Parish Clerk.

The Local Government Act of 1894 authorised the formation of parish councils. Parish rates were collected by an Overseer and Assistant Overseer, each elected annually by the Parish Council. Their normal term of office was two years and to provide continuity two were elected each alternate year. Mr W.S. Hunter was appointed overseer on 18th March 1918, and on that same date J. Walter Scott also appears in the Minutes Book as overseer. Mr Joseph Chester of Linton, assistant overseer of the parish, was paid two pounds ten shillings salary per annum in March 1918, and then six pounds salary per annum in March 1919. He was assistant overseer and clerk to the parish meeting in 1925, and secured a parish council for Lynemouth. Overseers disappeared in 1927 when the new Rating Act came into effect.

ROUGH SEA LYNEMOUTH
The sculpture by artist Graeme Hopper was installed to create an eye-catching gateway at the entrance to Lynemouth. Graeme - who specialises in sculptural ironwork - was commissioned by Isos Housing, a charitable, not-for-profit housing association, to design the piece on the corner of Albion Terrace and Fenham Road. Pupils from Lynemouth's William Leech Campus, part of the Ashington-based Northumberland Church of England Academy, were involved in its development during an arts week in 2013. Graeme worked with the youngsters on designs related to the sea, such as cascading waves, boats and starfish, which inspired the final work. The scheme was delivered by local environmental charity Groundwork North East, and contractor Mears. 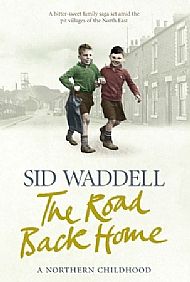 "I had not lived in the former pit village of Lynemouth since 1961 but the winding road north from Newcastle will always be the same nostalgic highway, each twist charged with vivid memories and powerful emotions..." So begins a story full of wonderful humour, emotional candour and hardy tales of tough times - a quietly epic family saga set amid the pit villages of the North East. It stretches from the 1920s, before Sid's parents had even met, to the final closing of the mine and his mother's death in 1999.

Sid paints a picture of a colourful, tight knit community full of good times and hard work, god-fearing women and hard-drinking men. Always dominating the skyline is Auld Betty, the pit head that took the men away each day and, with a prayer, brought them back each evening.

SID WADDELL the former sports commentator and television personality, known affectionately as "the Lynemouth Lip" and "the voice of Darts", was born in Northumberland in 1940. The son of a miner, he grew up in Lynemouth [at 102 Dalton Avenue, where he lived]. He graduated with a degree in hitory from Cambridge University, then started out as a TV producer working on darts' Indoor League in the early 1970s. This led to him becoming the BBC's lead commentator on all their major BDO televised darts tournaments. He also penned the highly successful children's television series Jossy's Giants. He worked for Sky Television and commentated on all major PDC televised darts tournaments. Sid was the author of Bellies and Bulleyes, his autobiographical account of the world of darts.