CLAPHAM: PARTS OF FOOTPATH NO 13 AND 14
TEMPORARY PROHIBITION OF THROUGH TRAFFIC ORDER 2017

Notice is hereby given that Bedford Borough Council intend not less than seven days from the date of this Notice to make an Order the effect of which will be to prohibit any person proceeding on foot along the length of parts of Clapham Footpath Nos 13 and 14 which extend from Ordnance Survey Grid Reference (OS GR TL) 0270 5278 (Map point A) to OS GR TL 0310 5274 (Map point B).

This temporary closure is required to enable repairs to be carried out on the bridge.
The closure is expected to take place from Monday 21st August 2017 for up to three
weeks.

The alternative route for footpath users while the closure is in operation will be:
Proceed south westerly along FP13 towards Mount Pleasant Road. Turn left towards the High Street and continue to its junction with Highbury Grove. Turn left onto Highbury Grove and continue to the junction with FP14 and vice versa.
The proposed Order will come into operation on 21st August 2017 for a period not exceeding six months or until the works which it is proposed to carry out on or near to the footpath have been completed, whichever is the earlier. If the works are not completed within six months the Order may be extended for a longer period with the consent of the Secretary of State for Transport. 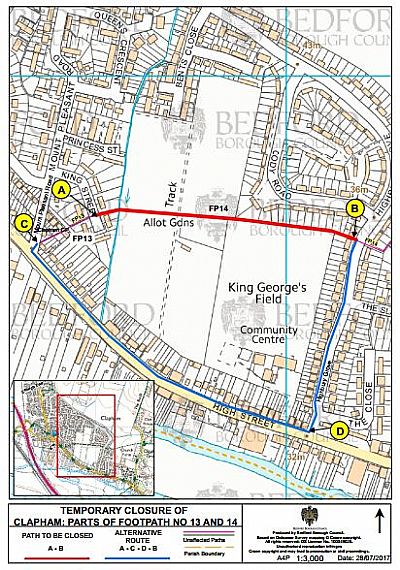