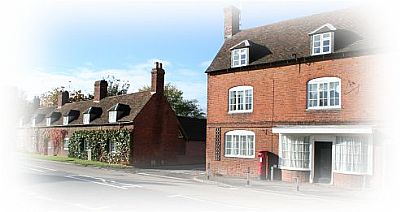 The Village of Coughton lies two miles south of Studley where the A435 slopes down towards the River Arrow. The nearest town, Alcester, is two miles further south. The central feature is Coughton Court, a National Trust property, set back from the main road in extensive grounds with the river running behind.

It is a small parish, within the administrative District of Stratford upon Avon, on the  Warwickshire & Worcestershire border. 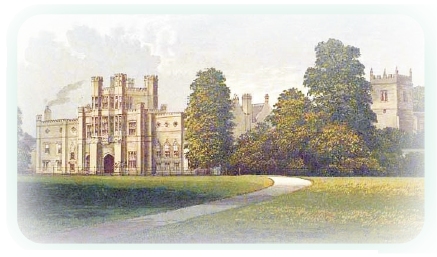 For over 600years, the village of Coughton has been historically linked with the Throckmortons, one of the great Catholic families of England. Originally belonging to the family of de Cocton, from where the name originates, the estate - including what is now Coughton village - passed by marriage to the de Spineys, and then again by marriage to the Throckmortons (of Throckmorton in Worcestershire) in 1409. The estate also included the hamlet of Wyke, which lay to the west of the present day Coughton. Nothing remains of Wyke except the moat of what was probably Wyke Manor (on the approach to Coughton Lodge Farm) and "Wyke Lane" the name for this road when approached from Sambourne. In 1946 the estate was given to the National Trust, with a 300-year lease in place and the family to continue living at the Court. The house and gardens are now opened to the public by the National Trust, working in partnership with the Throckmorton family. Most of the houses and cottages were sold from the Throckmorton estate during the 20th century to boost the Coughton Court endowment (which funds the conservation and maintenance of the Court buildings and collections). Coughton is unusual in that a substantial piece of land at its heart has remained undeveloped. It is an area of some 4 acres lying between Coughton Lane and Sambourne Lane.

Coughton Court
Coughton Court, the home of the Throckmorton family, is most famous for its 'Priest Holes', the ingenious secret hiding places used in challenging times for the Catholic faith, and for its connections with the Gunpowder Plot of 1605. The Court's Tudor tower gate house is particularly impressive and is one of the most architecturally ambitious structures to survive in England from the early 16th century. The house had a moat until the 18th century, with bridge access to the separate Tudor kitchen range which was later incorporated as one arm of the Georgian stable block. The Court was once framed by a magnificent elm avenue, which was lost to Dutch Elm Disease, and has now been replaced with limes. 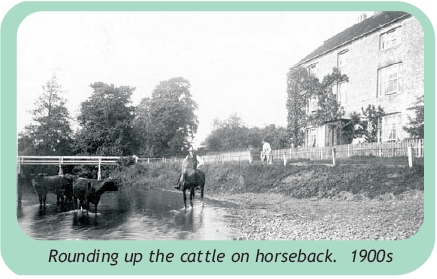 (formerly Mill Lane and Coughton Street) runs along the south side of the grounds following the route of an old packhorse road and became known as Warwick Lane as it crossed the ford through the Arrow, and over Windmill Hill towards Stratford. The remains of a brick weir, upstream of the ford, are all that is left of Coughton Mill, and just down stream of the ford, alongside the lane was a row of cottages and known as Derby Green. Several old farmhouses lie further along the Lane including Millford Farm opposite the footbridge that crosses the River Arrow further down stream of the ford. One mile further on was a thatched cottage with large garden, owned by the Throckmorton family, but sold to the Crown Estate in the 1930s. The cottage was demolished and replaced in 1936 with a pair of houses known as Crown Cottages. 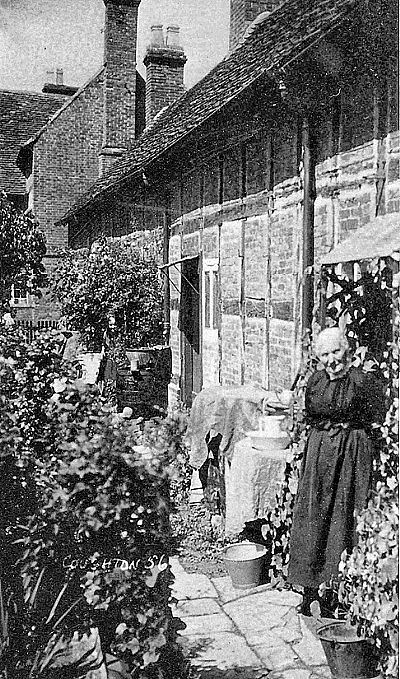 The 17th century timber-framing at the back of the old post office is characteristic of the first part of the northern side of the lane, which has former estate cottages on both sides, dating from the mid 19th century, again with brick walls and plain tiled roofs. The pair of houses next to the former almshouses is particularly striking with its armorial enrichment showing the coat of arms of the Throckmorton family. Nearby, largely concealed from view, is tucked the village school, a modern structure with an exceptionally busy roofline of low slopes. Opposite are two period thatched cottages (Listed). Further along the lane on the north side are former council houses built in the 1920s, and early 1950s, and then before the old railway bridge, is a pair of dark-stained timber clad dwellings that was originally a post war gift from Sweden.

The Main Road (A435) divides the historic village down the middle, with the houses to the west and the Anglican and Catholic churches and Coughton Court to the east. The village centre is considered to be the cross roads next to the medieval stone cross. According to local tradition, travellers entering or having successfully emerged from the wilds of Feckenham Forest offered prayers or thanksgiving for safe passage. 18,000 vehicles per day use this road with safety considerations now being in the form of speed cameras, introduced in 2001. Opposite the Cross are the former almshouses, the old post office and Coughton Cross Farm, the fourth side of this quadrant having lost its dwellings by the end of the 18th century when a small ornamental park was made west of Coughton Court. In earlier centuries there were more dwellings between the crossroads and the parish church of St Peter's, which is now visually isolated in its quiet setting adjoining Coughton Court. 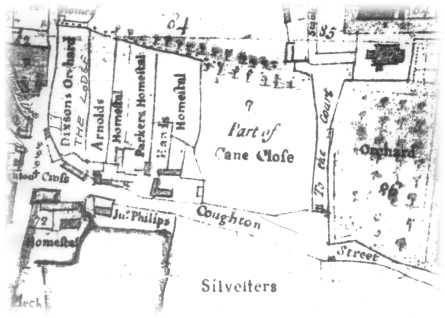 The buildings by the crossroads mostly show Georgian brickwork and plain tiled roofs. The old post office, of two-and-a half generous storeys has an 18th century front, but 17th century timber-framing at the back. The most substantial houses in Coughton front this old highway. Most prominent is the classical villa with sash windows and painted stucco, which is not quite axial with the great avenue centred on Coughton Court across the road.

Shielded from the road is a big-boned 16th century, timber-framed house, and further north is the former Throckmorton Estate Office, of late timber-framing with brick infill panels. Once derelict, it was restored as a private house, then offered B&B, extended as a care home and until recently was a private hotel. Further to the rear is an old sawmill that backs onto Cain Brook. Just within the village envelope, is the Throckmorton Arms, painted render with stained wood joinery, and a large extension to the south and west. Immediately behind here lie the extensive farm buildings that once formed Pool Farm, now tastefully converted into several dwellings.

Sambourne Lane is marked by the former Village Forge (c 1500) at the acute junction with the A435. The Forge retains its prominent horseshoe shaped doorway, a Victorian amendment of a much earlier building, all recently carefully repaired. Continuing along the north side of Sambourne Lane, discreetly hidden are a bungalow and two houses built in the late 1970's, and then the Pleck, a dark-stained timber house with white-painted windows. It was built for Sir Robert Throckmorton's sister, Baroness von Twickel, whose husband's family was connected with the plot in 1944 to eliminate Hitler. On the southern side of the lane, close to the main road, are semi-derelict farmstead buildings. Further west is the former Village School, converted in 2001 but managing to retain some of the original Victorian features. Next is the delightful Victorian chapel standing in the centre of the small graveyard. With plenty of trees here and good walls and gateways, this is a fascinating if rather neglected part of the village. 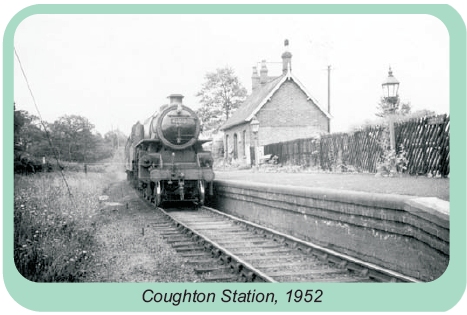 About half a mile further along the lane beyond the double bend (once a railway bridge), is the former Station House (1920's), and the Waiting Room, built to serve the Evesham and Redditch line that opened in 1866. This was closed for passenger use in 1962 and closed completely on 6th July 1964.

Archaeology
The village lies on the Birmingham- Alcester road, which follows the line of the Roman Icknield Way. There are a number of Scheduled Ancient Monuments on the Coughton Estate, including an ancient village in the front park - much of which is covered with pronounced earthwork traces of medieval and early post-medieval settlement, with house platforms, former boundaries, holloways and ridge and furrow.

Nature
Part of the village lies within a Conservation Area. A 2006 biosurvey showed the presence of several threatened species that are also rare in Warwickshire. At the back of Coughton Court and to the east of the River Arrow is a remnant portion of historic wood pasture, once part of the ancient Forest of Arden. Coughton is located in the shallow valley of the River Arrow and its tributary, Cain Brook. The River Arrow later joins the River Avon at Salford Priors. The topography is relatively flat and altitude ranges from 50m - 70m above sea level. Records show that since medieval times the area has been "watery and prone to flooding".

Geology
The underlying rocks belong to the Mercia Mudstone Group of Triassic age. However most are covered by either alluvium or river terrace deposits of Quaternary age. Several soil types have been mapped by the Soil Survey of England and Wales (1983). These include the Compton Association bordering the River Arrow, grading into the Arrow Association on the wider floodplain. Soils to the east of the river floodplain are of the Whirnple 3 Association, with soils of the Salop Association to the west of the floodplain.