HISTORY was made in Lynemouth on 1st June 2016 as the Parish Council conferred the Honorary Freedom of the Parish on Councillor Gillian Thompson, MBE, and Mrs. Sarah (Sadie) Hannah Williamson, MBE. At the Annual Meeting of Lynemouth Parish Council on Wednesday, 4th May, 2016 it was unanimously agreed that Honorary Freedom be conferred upon Gillian and Sadie in recognition of their eminent service and contribution to the well-being of their area. 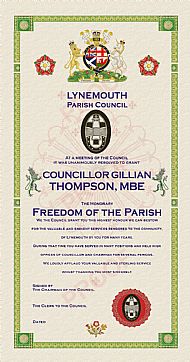 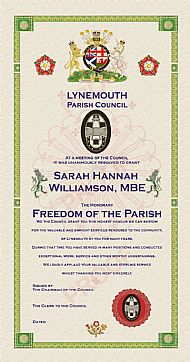 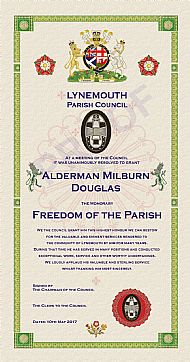 The Chairman's chain of office was purchased by the Clerk to the Council and was presented on Wednesday 7th December 2016 as a private donation (a gift) to the parish of Lynemouth, which will be passed over to those who take up the chair of office.

The citation on the scrolls reads:

“At a meeting of the Council it was unanimously resolved to grant Councillor Gillian Thompson, MBE, and Mrs Sarah Hannah Williamson, MBE, the Honorary Freedom of the Parish. We the Council grant you this highest honour we can bestow for the valuable and eminent services rendered to the community of Lynemouth by you for many years. During that time you have served in many positions and conducted exceptional work, service and other worthy undertakings. We loudly applaud your valuable and sterling service whilst thanking you most sincerely.”

The Chair of the Parish Council presented each scroll and said: "A record of many years of public service is a tremendous achievement. Gillian Thompson and Sadie Williamson have both made a significant contribution to the community throughout that time and continue to do so today. Both hold the MBE for services to the community for a range of work. The Parish Council is proud and honoured to confer Freedom on such worthy recipients. On behalf of the Parish Council, I wish to officially thank you for conducting exceptional work, service or other worthy undertakings that benefit the community of Lynemouth by presenting you each with a Freedom Scroll, the highest honour it can bestow."

The Council thought it fitting that Councillor Thompson should be the first recipient of the honorary freedom of the parish. Gillian has served in many positions and held the offices of councillor and chairman for several periods. The Council also felt that Mrs. Sadie Williamson has rendered eminent services to the parish and has contributed to the well-being of her area. A founder member of Lynemouth Ladies’ Tuesday Club, social secretary for a Darby and Joan club, running a dancing class, and still going strong organising the annual shoebox appeal.

The title 'Honorary Freeman' is bestowed upon certain individuals, or past Members, who have, in the opinion of the Parish Council, rendered eminent service to the Council, or conducted exceptional work, service or other worthy undertakings that benefit the community in Lynemouth.

A local council is permitted by legislation (Section 249 of the Local Government Act 1972) to admit, further to a council resolution, to be honorary freemen or freewomen of the place or area for which it is the authority (a) persons of distinction, and (b) persons who have, in the opinion of the authority, rendered eminent services to that place or area. In 2009 Parliament passed the Local Democracy, Economic Development and Construction Act in which Councils were given the right to grant honorary Freedoms in their area of jurisdiction.

The honorary freeman title confers no powers on the individual. It is entirely ceremonial. The Parish Council officially thanks people who conduct exceptional work, service or other worthy undertakings that benefit their community by presenting them with a Freedom Scroll as a timeless thank you. The scrolls are highly regarded by recipients.

To be granted the title of Honorary Freeman is a mark of distinction upon the person whom the Council wishes to honour. The Freedom itself carries no privilege and is purely an honour, reflecting the eminence of the person on whom it is conferred or as recognition of significant and valuable services rendered by that person.

A sealed and illuminated certificate of the grant of Honorary Freedom, containing a copy of the formal resolution, is presented to the newly appointed Honorary Freeman by the Chairman, with an opportunity being given for the recipient to reply.

The Freedom of the Parish of Lynemouth has been granted to the following people:

At a meeting of Lynemouth Parish Council on Wednesday 5th July 2017 it was unanimously agreed that enamelled lapel pin badges bearing the Parish Council’s logo and motto shall be presented to current parish councillors, honorary freemen/freewomen of the Parish, longstanding former councillors, and people who contribute to the well-being of the Parish as a thank you for their service and in recognition of their contribution to the well-being of the area.

A chain of office is worn by the Chairman of the Council, in keeping with the standing of the Parish Council, on the following official duties or civic occasions:

-           All meetings of the Parish Council and the Annual Parish Meeting

-           When hosting social occasions or formal functions within the Parish

-           When representing Lynemouth at formal functions outside the Parish

-           Any other occasion which the Chairman considers it appropriate.