Stoke Doyle Parish covers an area of 636 hectares of which some 16 hectares are woodland and almost all the remainder a mixture of arable and grazing land farmed by three farms - Seven Wells, Howe Hill and Manor Farm, the last two now managed as one. The River Nene marks the eastern boundary of the parish
which slopes gently upwards to the west, divided only by the north-south Oundle-Aldwincle road.

The village itself consists of thirty six houses, of which twenty seven (including the five in the relatively recent Old Farm development) are aligned along the Oundle-Aldwincle road, mostly on its west side. Seven are along or accessed from Church Lane which leads eastwards at right angles from this main axis and three along a cul-de-sac which turns into a bridleway to the west. The village has a church and a pub.

All but nine of the houses in the village are built in the same limestone. The five houses in the late 20th century conversion of Seven Wells farm buildings (the Old Farm development) harmonise well with the adjacent row of fourteen early 19th century cottages.

The Old Rectory (grade 2), dating from 1633, St. Rumbald Church (grade 2*), built in 1722 and one of
the very few Georgian churches in Northamptonshire, the Manor Farmhouse (grade 2), late 17th century but largely rebuilt in the early 19th century and the Shuckburgh Arms pub (grade 2), mid-19th century are all listed buildings.

A 1606 illustrated map appears to show some 60 dwellings, the majority of which, in contrast to the present day layout, are to the east of the Oundle-Aldwincle road, mostly along today‘s Church Lane. The houses shown on the 1606 map were built in a line leading much closer to the west end of the church with more houses also beyond its east end. Other houses were built along a road which no longer exists leading south east from the village across the brook as far as today’s Manor Farmhouse.

The diminution in the size and population of the village was remarkably quick and is therefore presumed to be the result of the 1665 plague. It was certainly sufficiently significant for permission to be granted to demolish the old Anglo-Saxon style church because by the early seventeen hundreds it was in a dilapidated state and considered too large for the village’s needs – the present church built to replace it being considerably smaller. However the population decrease continued throughout the 18th, 19th and 20th centuries – the 1871 census
records the parish population as 149 compared with the latest figure of some 84, and even within living memory was considered sufficient to merit a school. The process has only recently been reversed by the Old Farm development.

However, whatever the changes in the layout of the village, the size of its population or the types of employment followed by its residents, Stoke Doyle remains essentially the same – a rural village surrounded by farmland.The present population is some 84 persons (2015).

The listed and other historical buildings which date from the early seventeenth century to the mid nineteenth century include The Old Rectory, St Rumbald Church, Manor Farm House, the Shuckburgh Arms, Mill House, and The Row (the row of 14 cottages which run through the centre of the village).

The surrounding farmland area also has much historical interest. Areas close to the village include ridge and furrow (now grass meadows), a pillow mound (believed to be a historic rabbit warren for the provision of meat for the table), and an ancient woodland at Stoke Wood. All of these have their historic past cared for,
and with the increasing development of the farming stewardship schemes and the personal interest of the farmers and landowners, a quite considerable area of land collectively is now given over to conservation for both the flora and wildlife.

St Rumbald Church is a quite rare Georgian church, with a unique ring of Thomas Eayre bells. The simplicity of the church, with its single space of nave-cum-sanctuary, is a delight, especially when sunlight streams through the clear glass of about 3500 panes in the Georgian windows and shadows of the trees outside play on the colour-washed walls. Surrounded by silence or the sound of sheep it can be a profoundly peaceful place. To the west is the tower with a bell-chamber at the top housing the wonderful ring of Thomas Eayre Bells, and the clock just over half way up. There is a room north of the sanctuary, through an iron grill, which was formerly a mortuary chapel but now serves as the vestry. At its end is probably the most important monument in the church, to Sir Edward Ward, Lord Chief Baron of the Exchequer and father of the
petitioner, who lived in the Manor House across the stream to the south of the church and died in 1714. It was executed by J.M.Rysbrack, the brilliant sculptor from Antwerp, soon after his arrival in England in 1720 when he was 26, and erected in 1725 during the rebuilding financed by Sir Edward's son. The elegant, reclining, robed figure with wig is carved in marble and backed by a reredos with Ionic columns and a pediment. A lengthy inscription recalls his many virtues. The three butterflies in the coat-of-arms above have a punning reference to his wife whose maiden name was Papillon. Another of Rysbrack's major works is the tomb of Sir Isaac Newton in Westminster Abbey. The east window is Venetian in style: the outer orange panes seem to be a Victorian alteration of doubtful taste. Many of the furnishings are contemporary with the new building. These include the four gilded panels which form a kind of reredos behind the altar and carry the Ten Commandments, the Lord's Prayer and the Creed, the communion rail, the font, and the pulpit, though the sounding board which was once above it was used to make a lintel over the door into the bell-chamber. The pews are late 19th century – they certainly do not conform with the layout specified in the petition of 1722, which agreed to the installation of five double seats holding eight people in each seat, and 16 single seats holding five in each seat.

Stoke Doyle is an outlying ham or dependent on a settlement of Oundle. 'Doyle' is an affix taken from the surname of a 14th century merchant. Until the 17th century Stoke Doyle was a nucleated settlement with houses either side of the brook. Now at the centre of the village is “The Row”. These cottages were at one time thatched, as witnessed by the gable ends protruding above the level of the tiles. This row of fourteen cottages is ashlar built with fine detailing around the windows and front doors. A fire ball gutted the cottages on the afternoon of 12th June 1900, which probably accounts for the seven brick chimney stacks and the one
limestone chimney stack at number one of the row.

Facing The Row is the limestone National School Building of 1872. Then next to the school is a semi-detached pair of unpretentious mid- 20th Century houses (originally council houses), built in light brown brick, which matches the limestone of the older buildings well. Two pairs of council houses, matching the pair on the
Oundle road, line Church Lane.

At the end of Church Lane a little away from the present village centre, is our fine Georgian Church of 1727, set at one of the highest points of the village.

In the last ten years (since 2015) Stoke Doyle has had an increase in the housing stock of 16%, mainly from the development of the “Old Farm” area and its 5 residential properties. This has been a very good project, increasing the village population (directly and indirectly), by some 30%, and in terms of families, by nearly 60%. This project will be repeated with the current development of Howe Hill Farm, a very similar size and form to the Old Farm site (a further 5 residential properties). 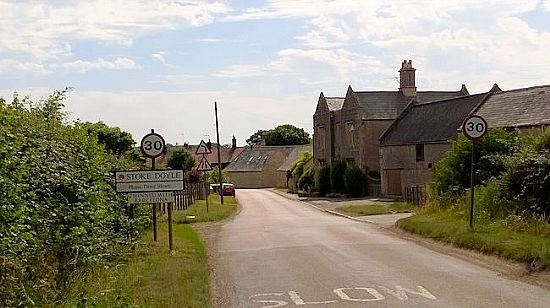 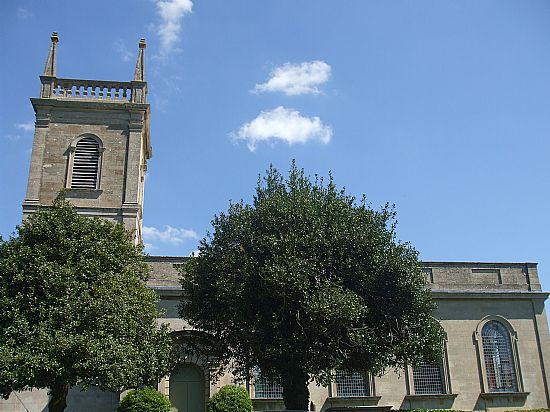